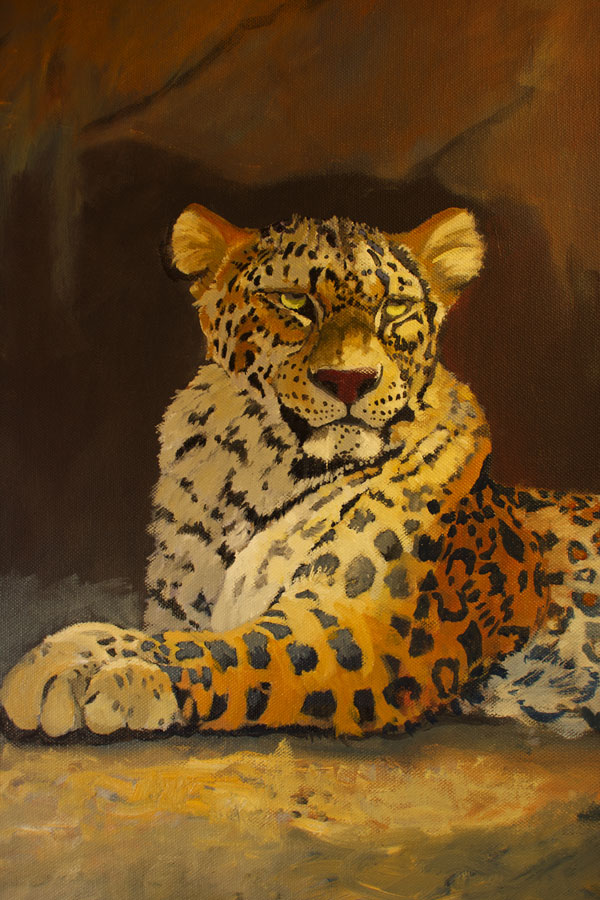 Detail of head and forelegs
In this close up of the head and fore legs you can probably see that I have taken the knife to the right hand side of the nose. It was not following the line of the head and needed adjustment. Scraping back to canvas is how I deal with errors like this. I've used Alazrin for the nose with just a little Ultramarine. Looking at it later in the day I begin to think that the nose is just plain wrong! You can also see where I have begun to glaze the area around the left shoulder of the leopard and re-drawn some of the rosettes to conform to the curves of the body.
The glazes I use are Ultra + yellow ochre for the area around the shoulder and tummy. Over the top of the head and the right side of the face Ultra + small amount of Alizarin .
I've also been working on the eyes. I've used a predominantly green background because I know I'm going to glaze over these later and I think the green will add depth to the eye. At one point, having taken a photo of the head I realise I have one pupil pointing in entirely different direction from the other. A case of spending too much time up close and not standing back often enough. My little studio is only 8ft by 12 so it's quite difficult to get back far enough to spot errors on these fairly large paintings. No excuse though I should have been more observant.

The preceding image, this one and the next are all of the painting at day four of the project.
Next
Previous